Volt UK’s ultimate objective is for the United Kingdom to return to the European family. We accept, however, that it may take a long time for the conditions to be right for this to happen. There must be considerable political change, both in the UK and the EU. In this position paper, we outline the Volt UK view on the conditions under which the UK might rejoin the EU.

Volt UK regrets the decision of the United Kingdom’s Government to leave not just the European Union, but also the Single Market and the Customs Union. Under the terms of the Trade and Cooperation Agreement signed with the European Union in December 2020, the United Kingdom also left programs such as Erasmus, further cutting links. We are already seeing both damaging consequences of these actions on British businesses across multiple sectors and the impact of British citizens losing their Freedom of Movement. Volt will work towards repairing this situation.

In terms of the UK political situation, the pro-Brexit Conservative Government at Westminster has an 80-strong majority. Pro-EU support is generally divided between several parties, and this poses a problem due to the First-Past-The-Post system used at general elections. Additionally, the Conservative Party have considerable media backing, whilst proposed boundary changes would also favour them.

As the UK changes, the EU will, inevitably, also change. Volt Europa are proposing a set of changes to make the EU more democratic and more responsive to citizens’ needs. Although there will be important aspects to consider in the rejoin process, such as Schengen and the Euro, Volt UK maintains that this should still be attempted, and with a proper democratic debate and good faith negotiations with the EU, the opportunity to rejoin the EU is still very much alive.

We should accept, however, that rejoining the EU is something which can’t happen overnight. Nevertheless, we can begin working towards making this outcome happen- on both sides of the Channel. We will remain in close contact with Volt Europa and our sister parties across the EU, to continually highlight that a significant proportion of UK citizens want to rejoin the EU and work together to develop policy solutions to shared challenges.

Volt UK notes with regret, since the turn of the year, the further deterioration in the relationship between the government of the United Kingdom and the European Commission. If the UK and the EU are to successfully take on the challenges shared by both the UK and EU member states, such as the climate emergency, then they must cooperate.

Volt UK believes that the EU Ambassador to the UK should have full diplomatic status. We also believe that the EU and the UK should create a shared Foreign and Security Policy. We call for the UK Government to observe the Northern Ireland Protocol and stop breaching it.

Volt UK believes the UK Government should work to join Erasmus Plus, as this would benefit British and European students and universities whilst providing a supplement to the Turing Scheme. At the next opportunity to reconsider the Trade and Cooperation Agreement signed in December 2020, we will urge the UK Government to re-enter the Customs Union so that the disruption we have seen since January 2021 can be eased and reversed.

Volt UK will continue our efforts to encourage British and European civil society to engage, in spite of the barriers; to oppose policies that would put further barriers up; to promote electoral reform under the Fair Systems Agreement and to advocate for public reconsideration and support for the UK to rejoin the EU one day.

Volt is a pan-European party with a vision for a more united and equitable Europe. Our policies, guided by our principles, are forward looking, evidence based and pragmatic. As a pan-European party we are able to address the big global issues, but we are also able to share ideas, experience and solutions for problems that affect our local areas all across Europe. By working together, guided by the best insight and evidence, we create Volt policies that can meet the challenges of our time.

To start, housing is a concern for many Londoners. We acknowledge the importance of considering housing as a market different from others, with governments holding a special duty to ensure residents are adequately housed. Volt wants to explore innovative housing models such as community-led housing and shared social living. These are tried and tested in many European cities. For example In The Netherlands there are hundreds of co-housing projects for older people and La Borda in Barcelona is another outstanding example of cooperative housing. In Austria, models of multigenerational housing are being developed. We will see how we can implement learning from these examples in London. Such housing initiatives can be encouraged through subsidies or low-interest loans and with technical support. We want to support supply of social housing, for example through converting under-used buildings, and work towards more efficient use of space to maximise housing.

Another key area for London is policing. Volt is committed to European police cooperation. When crime crosses borders it is essential that policing does too. Brexit has resulted in the UK leaving Eurojust and Europol meaning that access to international justice and security information has become laboured. As an international city, it is essential that London policing has access to European security and policing data to ensure the safety of all who call London home. Volt recognises that the Metropolitan Police do excellent work but are underfunded and the relationship with the communities they serve is strained, particularly as a result of recent events. We want to work with the police and with the community to improve working relationships and ensure that the communities in London feel that they are protected, and to help rebuild trust that has been lost. We also want to ensure the Metropolitan does not operate with discriminatory practices and while minimising violence.

There are challenging economic times ahead and Volt will focus on people and innovation, to unleash entrepreneurship and support small business. We want to develop a more flexible labour market that adopts the best of the Danish “flexicurity” model by providing unemployment support linked to re-skilling and reintegration into work. This will work towards making the labour market more fluid and ease job-seeking. Our economic recovery depends on working closely with our EU neighbours and Volt will push for this. We want to explore a London residency permit to ensure London can keep getting EU talent. We will also support research into new and emerging technologies. We believe in a smart state and transparency, and will publish the London budget in a way that enables the public to engage and scrutinise public spending. Volt also supports a large scale pilot of a universal basic income to see if it can effectively address poverty. We also support the London Living Wage and want to explore if it should be made compulsory. We will work to make sure Londoners can afford to live in London.

City living can be green living when done right, and we can achieve this in London. The climate emergency requires many changes, and we will work with citizens and experts to build back a better urban environment. Our economy must take health and environmental cost into account, and we must ensure the right governance at the right level in order to foster an inclusive society that cares for all, particularly marginalised communities.

Volt is ambitious when it comes to new transport solutions. We want to enable emission-free, environmentally-friendly travelling, and shared mobility. For London, this could include looking at orbital transport to relieve congestion on the M25, and revisiting the now disused underground freight network to consider possible uses. We would also like to see the proposed Crossrail extension to Ebbsfleet to connect London more easily to EU-bound services, and a rail link between southwest London and Heathrow.

London is a cultural hub. We want to maintain strong European ties that maintain our arts and culture as the powerhouse it is. London should continue to seek EU funding, and we support initiatives which encourage cultural exchange. London has always benefited from cultural exchange and our vision is to keep it that way.

Volt wants London to remain the great city it is. We want London to remain Europe’s gateway to the world, and keep benefitting from ideas and talent moving here from across Europe. Where feasible, we will work for London to align with EU standards, regulations and initiatives, making the most of the opportunities that will give the city. As a pan-European party Volt will always push for the UK to rejoin the EU, as this will provide the foundation for London and the UK to thrive. 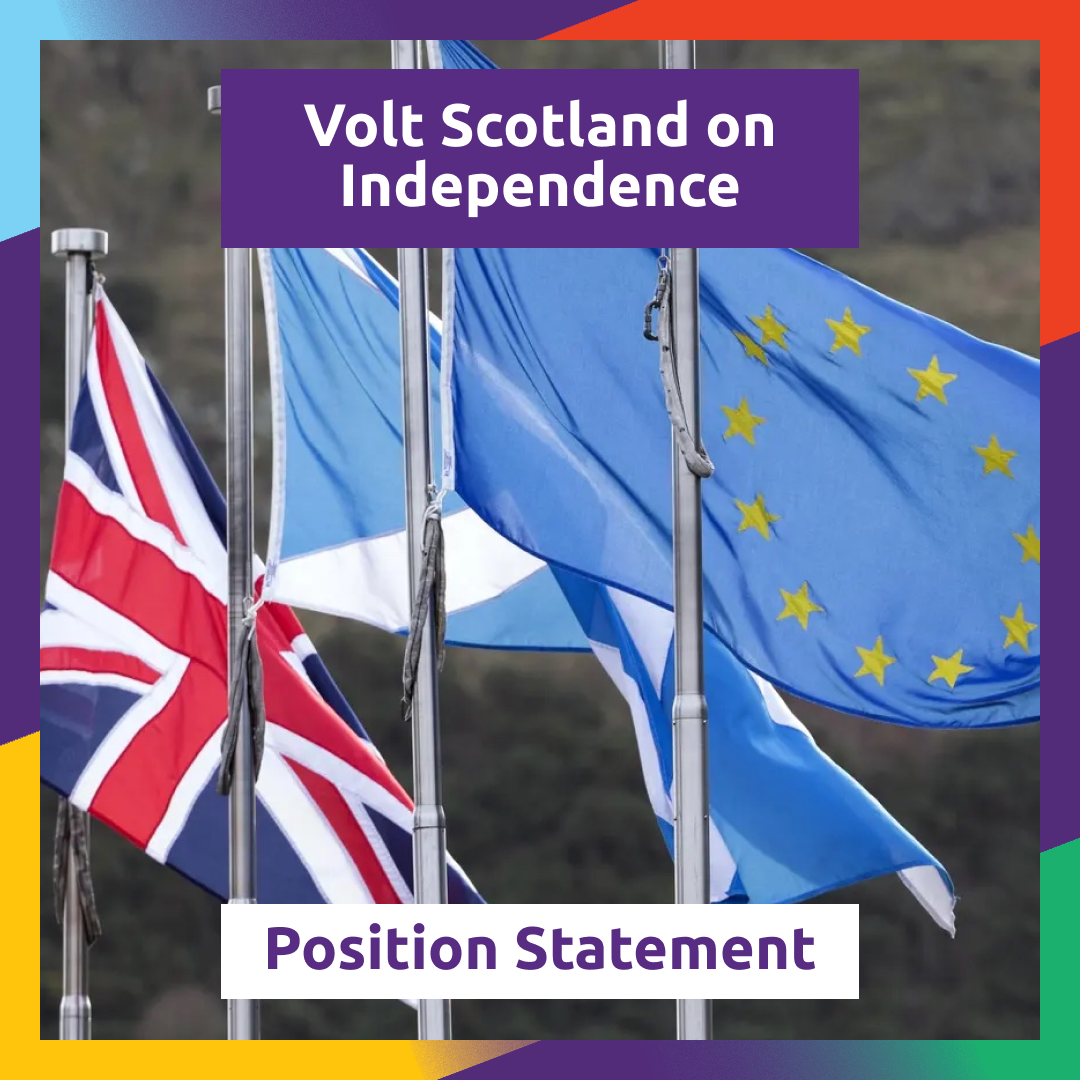